about old coins????????????
I ask this because while clearing out old things that have been around for ages Hubby came up with this saying that his mother had it given to her as a keepsake the year she was born.
We wont be parting with it because its part of family history, not that I think its worth anything but would like to know what value it was then.
We thought it might be an old Crown coin. Curiosity makes me want to find out.

Here are pictures of the front and the back of it.

Hello Maisie this coin is A one Crown it ran from 1893 to 1900 and has a 92.5 % silver content they were stopped when the silver in the coin was worth more than the face value ,
The words around Victoria on the face of the Coin are , "VICTORIA DEI GRA BRITT REGINA FID DEF IND IMP" this is Latin and says ,"Victoria, by the Grace of God, Queen of Britain, Defender of the Faith and Empress of India", this being the height of the British Empire , some of these coins also had an inscription around the rim like the modern pound coin it is in Latin again and reads ,"DECVS ET TVTAMEN"meaning "An Ornament and a Safeguard"and "ANNO REGNI" followed by a Roman Numeral this is the year of her Reign.
The dude on the horse is Saint George slaying the Dragon similar to the old 1 penny the pre decimal one ,
Maisie in a fair used condition its worth about £20 but if you mounted it or placed it with its provenance it would be a priceless item for your families future , a mint uncirculated one is worth close to £400 but they will be as rare as Rocking horse Poo

Maisie this has been fun and I have dug up this is a full silver crown valued at 5 shillings in its day the other was a half crown available at the same period that was 2 shillings and sixpence yours shows Victoria in senior years prior to this she has the same coin Tail, of St George and the Dragon but she appears as a young queen

I have just had a look on Ebay Maisie, seems the Silver Crown (5 shilling coin) is like yours, has Queen Victoria in the full veil there with the drop earring, Saint George on the reverse, and has the word Reginald at the front like yours.

The Silver Half Crown has Gra Britt - Reg, at the front, and a Shield on the reverse.. 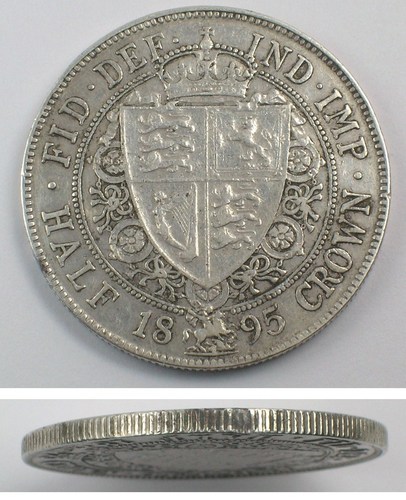 Well done you sleuths you

I must hunt out my old coins.

What a treasure you've got there, Maisie!

As suggested, mounted, perhaps on a piece of dark velvet with a little info bit added belong it and then framed ... it really is so very wonderful to have and such a wonderful item to pass along one day.

I really must dig out the few coins I have and take a photo to see if anyone here can help me identify one ... brown, terribly worn but with a wee hole at the top ... I used to thread a chain through and wear it.

I also have one with a hole and it has been enamelled on one side in black and white.

I have a sixpence somewhere with a hole in it, that used to be on a chain, I will try and hunt it out..

Just thinking now I read that the drink Coke' was used to clean old coins, amazing it was to watch that happen.
But really it's so nice to have them as they are really, adds that age to them in their appearance..
_________________

I'd love to see images of all your coins, our lovely ones!

I have very few truly old ones but my oldest Grandson have loved looking at them since he was tiny.

When each child was born, tried to collect a coin of each amount each year and stuck them into the photo album along with their birthday photo each year. Wonder if they'll stay there or be pulled off and spent one day - huge laugh!

Many thanks all you lovely folk for getting back to me and I will be printing the information off about it.

Nice to have as a keepsake to pass through the family knowing that hubbys mother was presented with it when she was born even if it isn't worth much.
I love old documents and things like this and as hubby and I are in our 80s now I am looking through things to find that I can throw out but have had orders from the family NOT to throw anything away because they want it.

That is a great suggestion Mara about mounting it on velvet.

In fact I have just been having a word on Facetime with my grand daughter who is at Chester University and I have just shown the coin to her and she asked me if she could have it as a keepsake.
As we only have the one grandchild she will definitely get it I will let her choose how she wants it mounting.

Thanks everyone for taking the trouble to get back to me.

Maisie the value in the coin is that your Husbands Mother will have had that from when she was a little Girl ,one thing I would ask you Maisie as your going through all this history of your family when you find photographs and little things photograph them and write what they are and anything you know about it , so often family have things and know nothing of them the magic is in knowing and you and your Hubby both have all the information just write on the back of the photograph who it is and where it is , its easy to look and think others will know but many of us will have things we cant identify or know nothing about ,
Mara add them coins I will hack into Tanoomas puter and pinch the information , it will be fun trying to solve the puzzles ,

Yes I am writing a tab that can be stuck on the opening of the album where the photo is protected of who or what the photo is about.

Its a long job BUT doing it at my family's request.

Wonderful Maisie just think in 50 or 100 plus years time someone will pick up that album and read your words and be able to know what and who the Photograph is about , its time consuming but so worthwhile ,

I think its to keep my brain busy Captain, what bit I have left.

Your Brain sounds fine to me Maisie dont worry its nice to look at some of these old photographs and either go back and see the exact spot today or see in the background a picture or an ornament that you still have , it all adds to them ,

Yes I will second that for sure, your brain has brought such wonderful memories for so many our Maisie, and your books will have enthralled all who read them, you have so very much of interest too.
_________________

Many thanks for the confidence boost regarding my brain Tan and Captain.

I have to agree though that it will be nice for future generations to look back on. I know how I have felt when reading old marriage and birth certificates and trying to slot them all into place.

A great thing you're doing, our Maisie - and what an incredible gift it will be for your Granddaughter and her grandbabies one day!

And while you won't have the same woe because as you said, your lovely Granddaughter is your only child ... I made copies of each and everything for each of 'our' girls ... and stuck many of the originals in the Safety Deposit Box in Credit Union 'just in case'.

Have you added wee notes somewhere about jewelry, etc, I wonder?

I don't wear much jewelry so a few years ago, gave it to all the girls except for a few favourite things (and my wedding rings, of course) ... and gosh, amazing how much of it I'd forgotten the family story behind it - drat.

I dont wear my wedding or engagement rings Mara.

I had to have my first ones cut off because of my fingers swelling and hubby bought me some new ones but I felt better without them so left them off.

Since I have got older I cant wear any jewellery because it makes me itch.

Nothing worse than being dressed up to the nines and then tearing yourself to pieces.

Had quite a few odd looks over the years when folks ask us how long we have been married and can see that I wear no rings.

Maisie, I bet you just smile gently and tell them, "It doesn't take rings to be happily married"!

Your Granddaughter must have been so thrilled to be given your first engagement ring and I'm sure she'll treasure it forever, too.

I hope the weather is better at your end of the globe than it is here.

Plenty of rain here but at the moment the sun IS trying its best to peep out from behind a cloudy sky.

I am doing a bit of knitting at the moment apart from calling in to see if I have any messages and to see if its my turn to play Scrabble.

Got to keep the old brain and fingers going.

I've been keeping my fingers going by playing in the little garden and as for the brain - well - huge grin as I am determined to keep the mind functioning as long as possible by doing crosswords before falling asleep every night.

What is your latest knitting project, I wonder?

Yesterday the weather was actually nice, luckily, but today it's gone back to our usual - and isn't it poopy to have this chilly weather with raining skies nearly every day, Maisie.

I cant get down now to do the garden Mara so I have asked a gardener to come WHEN the flippng weather gets better.

I am knitting a baby coat at the moment. My ganddaughter asked me to knit a set for her boss's wife who is expecting a baby in October. Granddaughter is still at University but comes home at weekends to get experience in a big photographers here. She works at the photographers Saturday and Sunday and goes back to UNI Sunday evening.

Glad you've got a gardener to do things once the weather gets both warmer and drier, Maisie ... gardening is fun but also very hard work. Wonder if one ever gets to the point with one where nothing needs to be done and one can just sit and sip ice tea and enjoy!

Bet the baby coat is adorable and how pleased your Granddaughter's boss and his wife are going to be to have something so very special. What colour/colours are you working with, I wonder?

I do envy your Granddaughter as how I'd love to be able to take incredible photos ... granted skill can be taught but I suspect she is one of those with the natural talent that I sorely lack. Must be wonderful to see her on weekends and be so close to this lovely girl.

Yes she is a cracker Mara.

This is her being her own model for the exhibition that the students put on. She could not persuade anyone to do it so she set it up herself and took a self photo.