Some old things I own ,

Some old things I own ,

Well folks I have been doing a little bit of looking myself and founds some Nemo artifacts and family Archeology and took some photographs ,

Here are some various Medals from My Dad and his dad and even my great Granddad has two some old coins and some photographs so here goes ,

Many years ago at least 20 Dad and I were on the cherrhill downs at Yatesbury attempting to get up the side of the hill and there were all these rabbit holes and Dad spotted this buried bottle its clearly very old and has a kind of corrosion on it an oxidisation the ground is pure chalk but this was buried at some stage on rolling the bottle its not to symmetrical either and a clear ish glass I think once but to have a rabbit unearth it anmd Dad find it was neat , 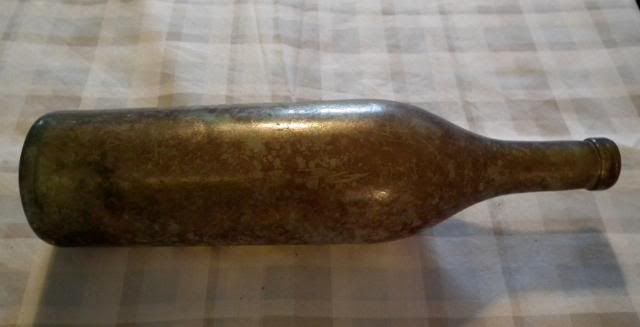 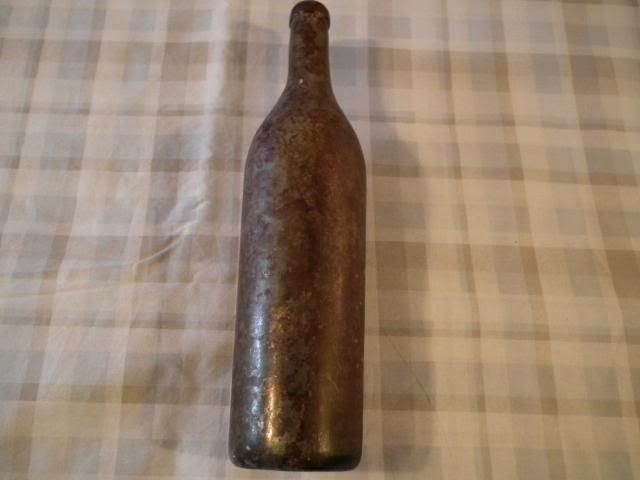 Here is the only picture I have of my great Great Granddad and Grandmother and the Baby is My Dad Dad , the lady was a district nurse back in the 1800s and he was first in the Army as one of the medals says in Egypt in some campaign in the empire days in later life they had a public house along the South coast behind London, 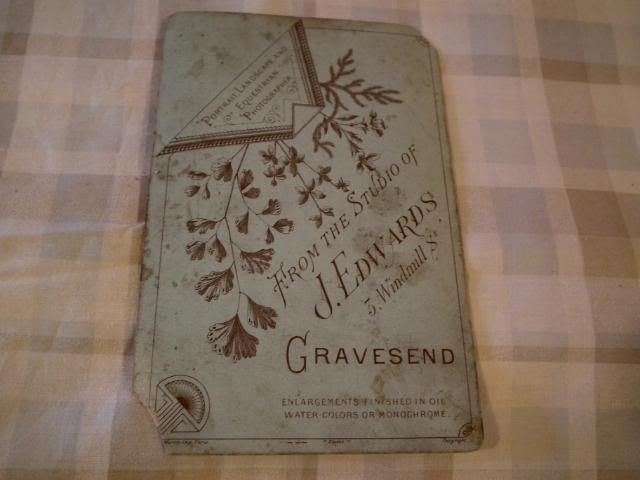 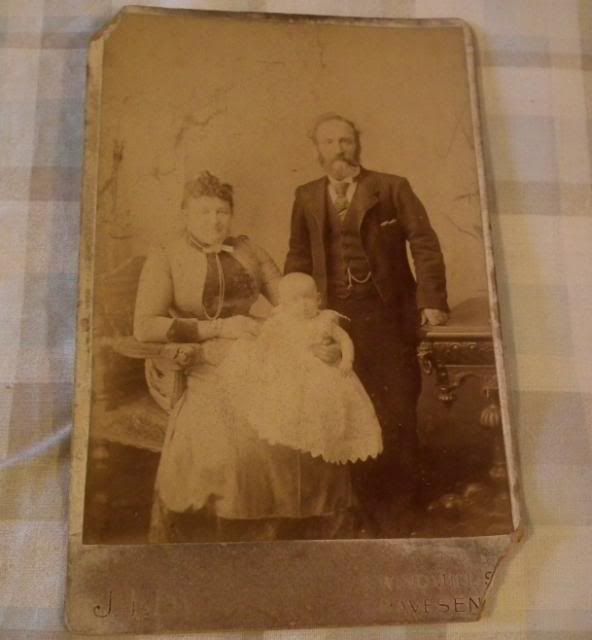 Here are some old British coins you can see a row of shillings and Sixpences and a Penny and some Halfpennies and a 2 pound coin and a threepenny bit and some others I dont know , 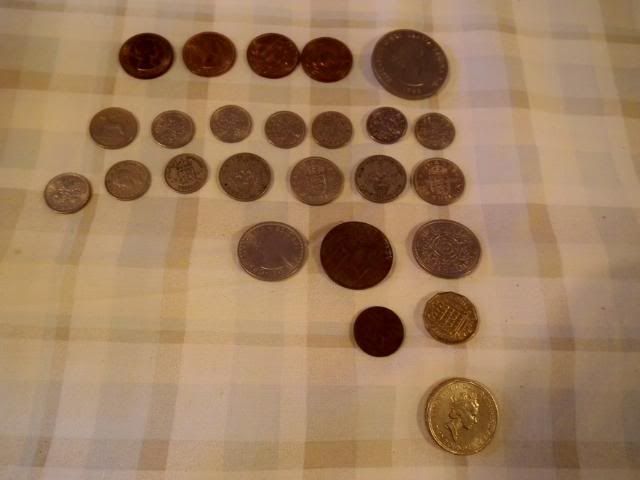 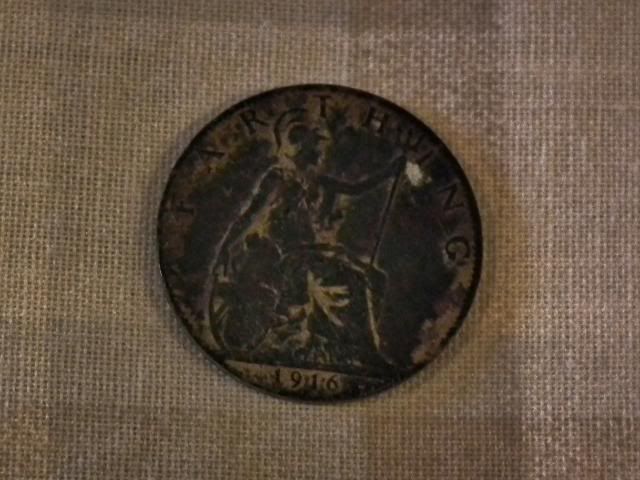 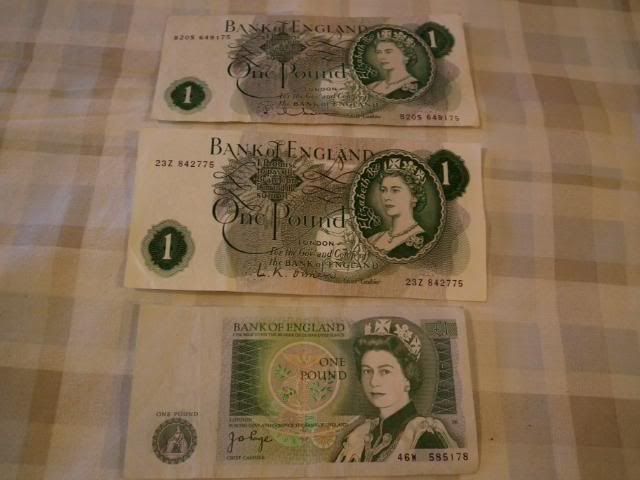 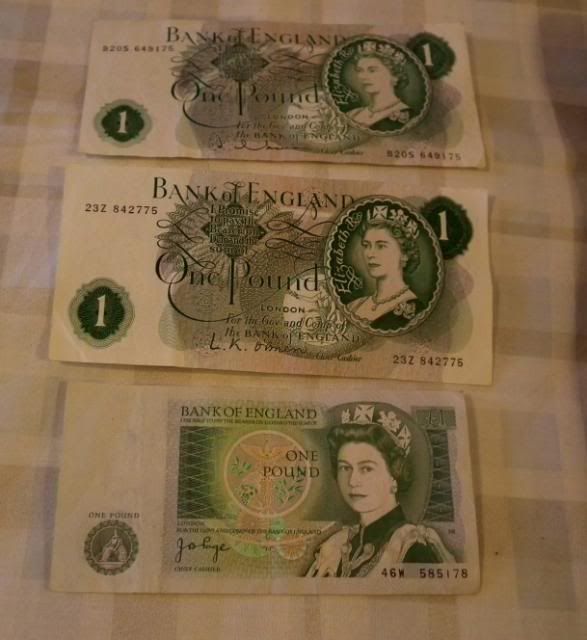 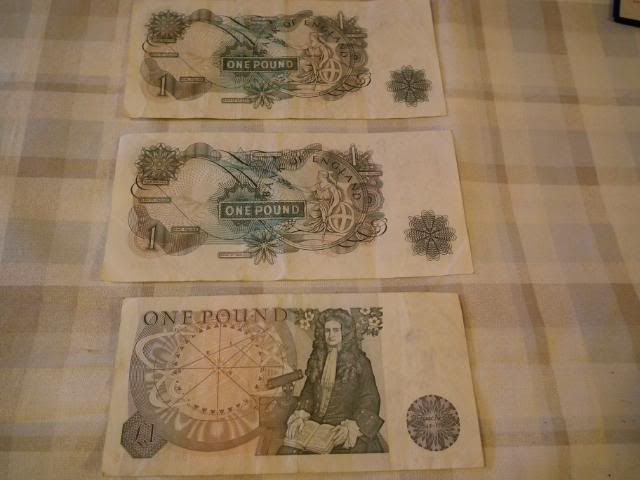 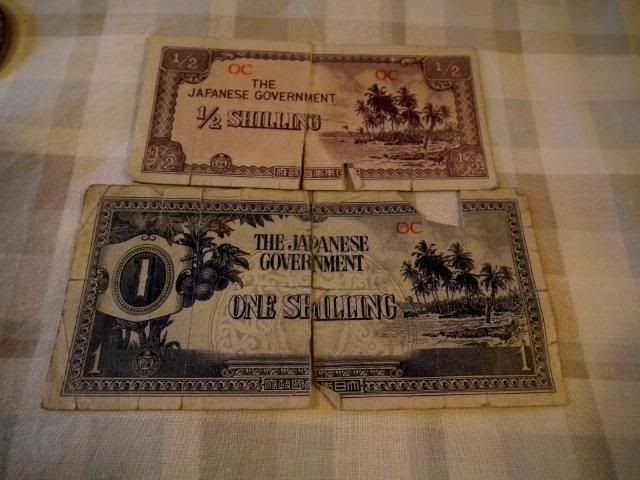 This one is very special I havent ever told anyone about this one it was my Brothers after he passed away It was in his jacket pocket so I took it and placed it in a box , 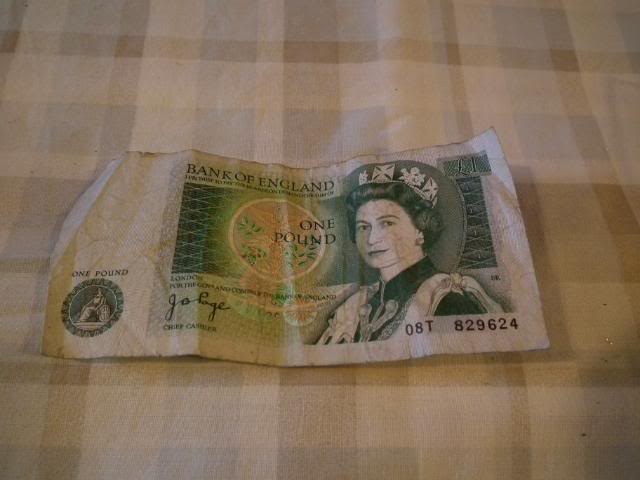 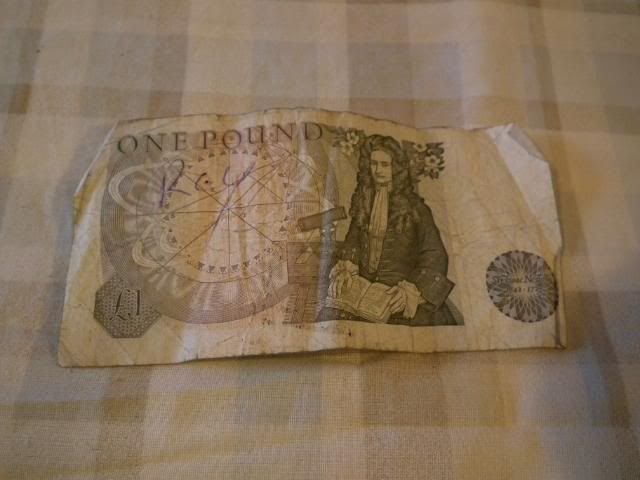 When my Brother was Baptised Granddad filled this little Rum bottle with Port from the after wards get together its never been opened , the original rum in it was 70% proof that is very strong 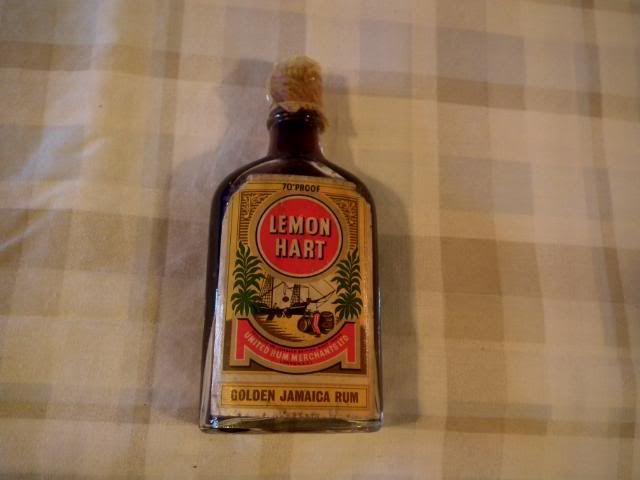 These are some of my coins Chloe made this at school for me when she was very little and I used to save coins in it but the Pennies are all collected in the year 2000 on the Millenium I figured a Lucky penny at a special time they are all in new condition as all the others are as well I always used to keep all the new coins and save them , 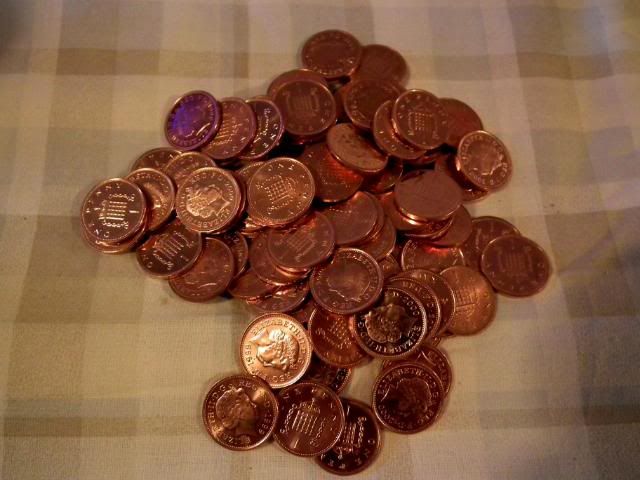 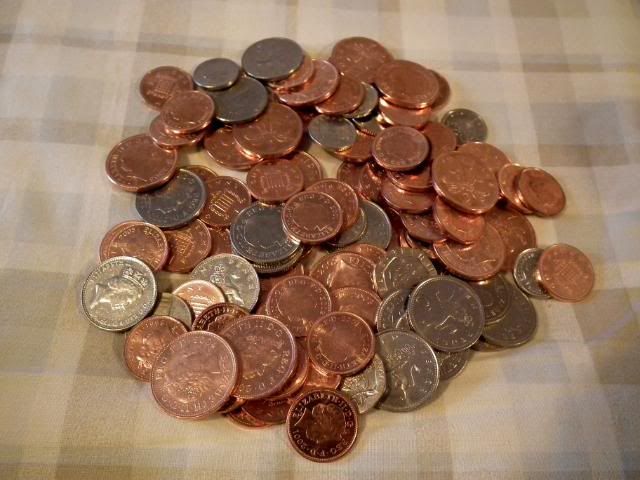 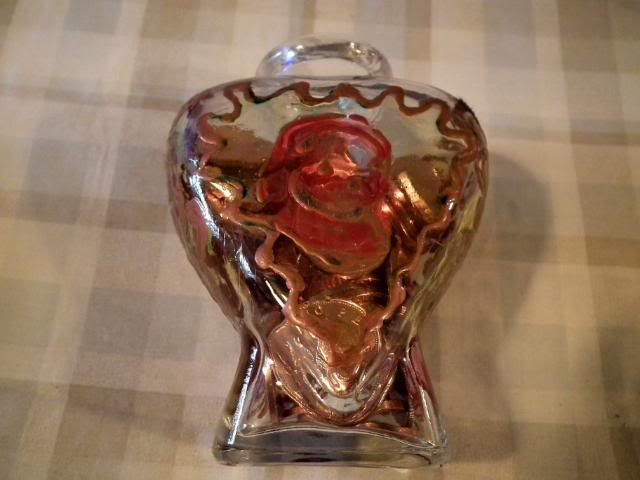 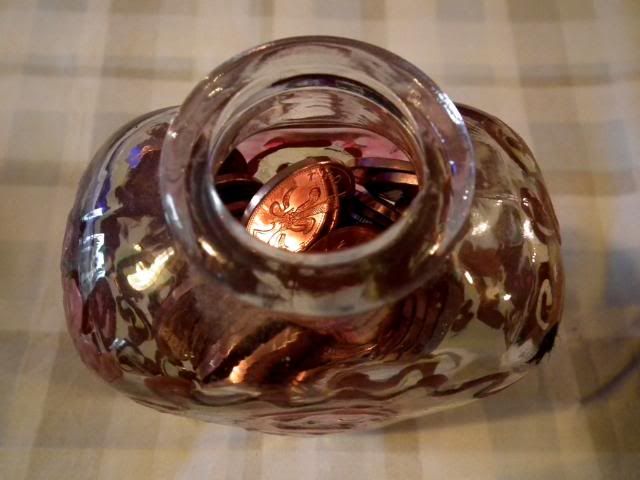 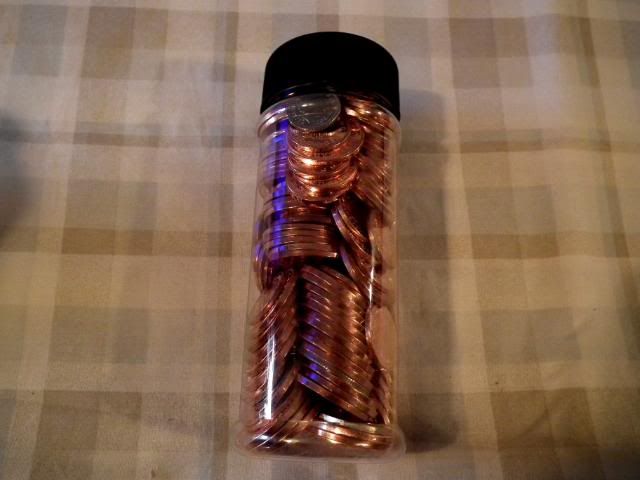 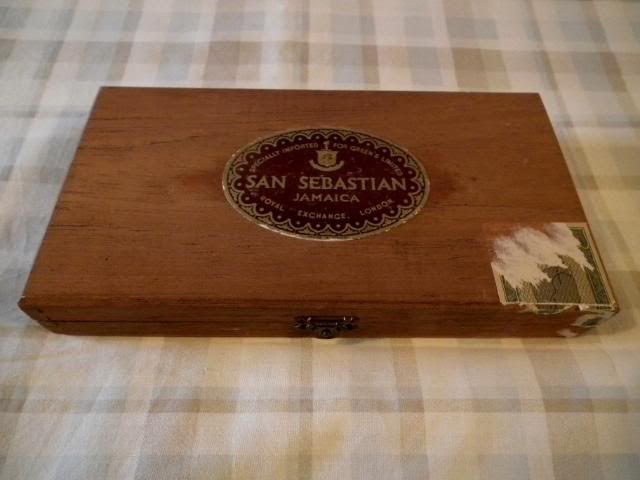 I think this is an Embroidered RAF badge , 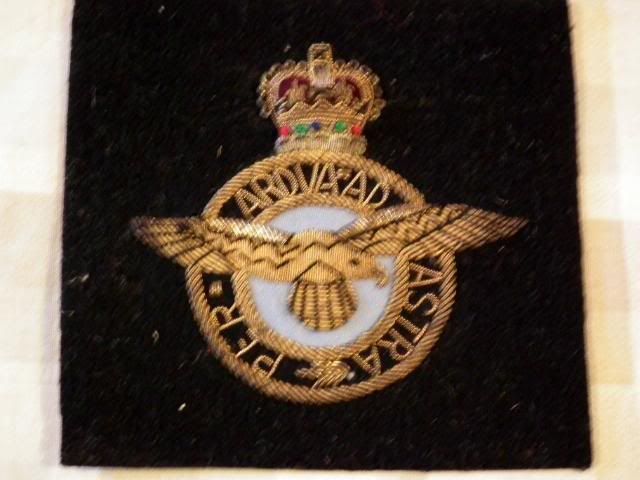 Here are all the Medals 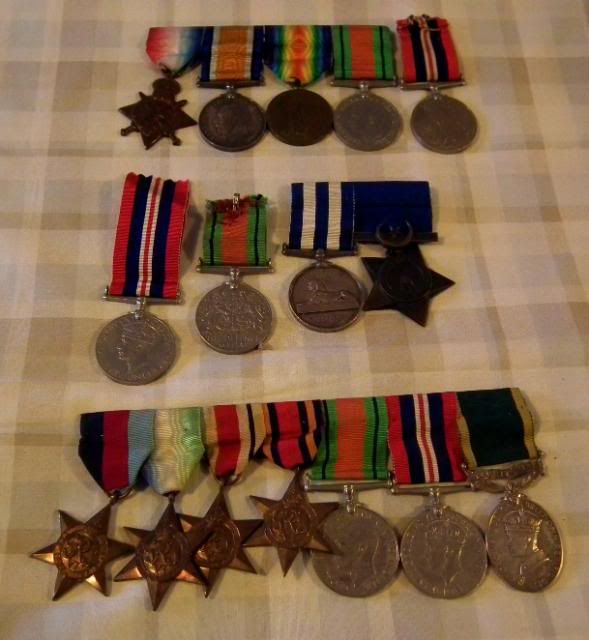 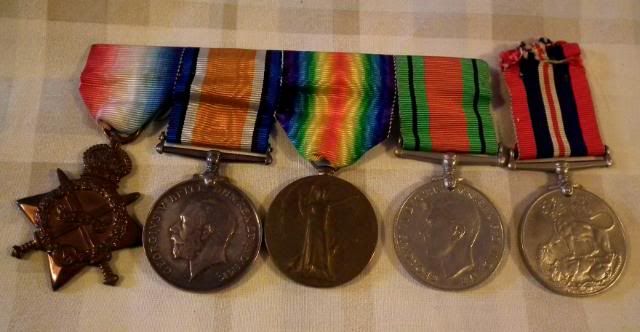 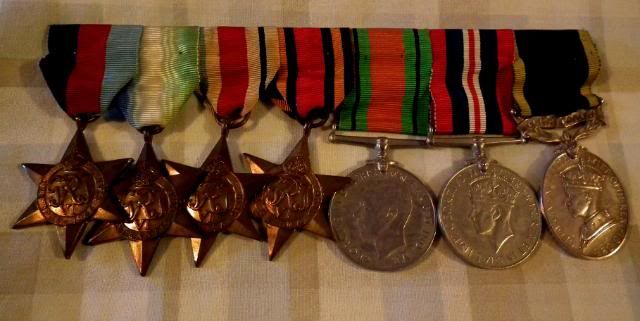 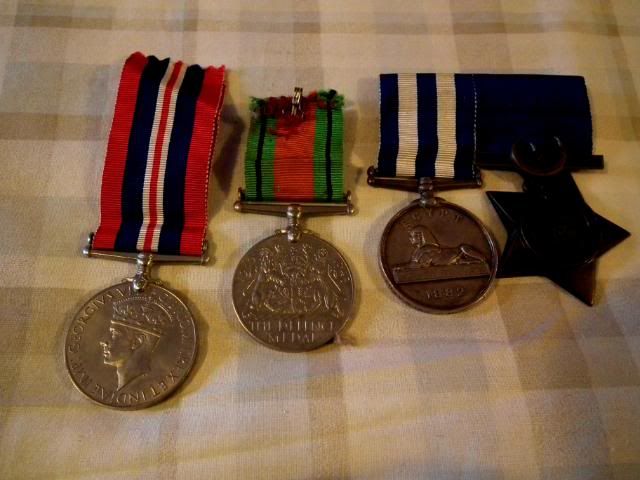 What a fantastic collection Capt. Especially the £1 you found in your brothers pocket bless him. It would be lovely to know what the medals were for but a splendid array they are. They may be quite valuable too.Look forward to the next posting.

Such precious treasures for sure our Captain, the medals so proudly earned and deserved too, so pleased to see you have them there for all time, as with the very precious £1 Note of your dear Brother, so very sad of course that he died and young too.
The beautiful glass bottle there your Chloe made for you, she will be so proud too knowing that you still have it with all your lovely keepsakes.
To see photo's of older generations are lovely, the photo in itself of course, but to see their clothing too, all dressed up in their lovely finery.
Thankyou so much for showing these Captain and post as many as you like, sure they will all be so enjoyed to see.
_________________

Thankyou folks its nice to show them all the old photograph is old I think it has to be around 18 80 then a photograph was something very special and would have been on the glass plates but such a formal event for sure , I was told My G Great Granddad was one of 9 boys ,
The pound note of Grahams is precious and all them pennies I couldnt spend them it was fun to collect them ,
Im glad you liked looking I will do more I promise thankyou,

I like the old bottle ever so much - there's something wonderful about it to have lay buried so long unbroken - and what a great memory to go with it of being with your Dad and having a rabbit find it for you.

Perhaps it would love to sit on your table with a few happy yellow Buttercups in it?

How wonderful to have both the picture itself as well as the cover from the photo studio of your GGrandparents and their little one, Captain - having something like this is such a treasure and makes them 'come alive'. Having dates and names is nice but photos such as this - simply super!

Seeing all your old coins and paper currencies is great fun but when I saw the special treasure you found in your dear brother's pocket, what bitter-sweet memories it must hold for you, our Captain. So very much understand why this is tucked away safely and how I wish things were different and your brother was there with you sharing life. Gentle hug.

I shudder to think of the potency of the port still inside that rum bottle but one never knows when a good shot of something will be just what's needed in the future, right? Grin!

That coin jar so lovingly decorated for you by Chloe when she was little is so cute ... one can't help but think of tiny little hands and massive concentration when she made this for her special Uncle.

I know nothing about medals either but do know that each means a great deal - both when it was given and always for any of us lucky enough to inherit these medals so well earned by the brave who went before us, Captain.

As both Joelle and Tan said, you've got such a wonderful array of treasures and how I too have enjoyed seeing them - thank you, thank you!!

Perhaps the below may be of help in identifying some of your wonderful medals, our Captain?

And the below is an actual Forum devoted completely to medals
http://www.britishmedalforum.com/

A splendid collection Captain. My dad collected coins and I used to have bottles full of old half-pennies.

I have many very old photos as well and, like you, I treasure something found in my dad's pocket and it was two photos of him and my mum.

The little keep sakes can be so precious and Mara thankyou for the links I will try and identify them but goodness there are a lot of them and the variety but many do have a date so a good indication there ,but the ribbons also are changed and mean different things they are very heavy mind for what they are ,
I do wonder just how old that bottle is and how it got buried in the hill side ,
June you will have to keep them photographs safe and labeled I say this a lot but in the future folks wont know any details about photographs left them and you know how nice it is to have some information on them it does bring history to life ,