The largest invasion and armada, in history, took place 69 years ago today off the coast of France. My uncle was in the Calgary Tank Corp, which was part of the Canadian second division and he took part in this invasion. Lest us not forget all the brave soldiers, airmen and seamen of our allies, who lost their lives that day. The Allied casualties figures for D-Day have generally been estimated at 10,000, including 2500 dead. The main participants, that day, were British, Canadian and USA personnel. This was the beginning of the end for Nazi Germany.

Never to be forgotten our Rich, all who went there, as your Uncle too, they gave their all, and more.

God Bless them all. 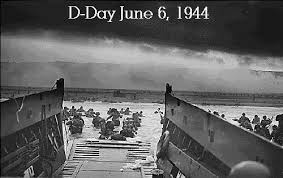 Thank you to our Joelle for our D-Day Banner.

My late husband (a good bit older than me) was in those landings driving a jeep. he was queuing up to get off but decided to drive into the water and risk it rather that getting shot it wasn't too deep and so managed to drive onto the beach, he had a lot of lucky escapes during the war.and was away from home for 6 years. His mum saved up her all the mothers allowance and together with his demob pay he started his garage business when he was demobbed.

Joellie how come your mother in law got the mother's allowance? My mother was very annoyed as she got nothing from the Government for me.

What a day that must have been Rich, if you read the book about the ATA flying girls they give a great description from the air, of the Armada build up on the South coast then one morning all gone. Every little river or creek jammed with boats or landing craft, every road full of tanks of all descriptions.

I don't know Nordog, it was long before I met him and got married but she definitely got it, maybe because he was living at home when he went into the army and she was a widow?

My Dad was with Patton's 3rd army and I can remember when he came home in 1945. No matter how much we hate war I don't think we can get rid of all the ones around the world that want to use it for some reason or another.

This was the beginning of the end for Nazi Germany. ... how true, Rich ... and sadly it was the end for so so many brave soldiers too - sigh.

How incredibly brave your uncle was and your late husband too, Joelle and your Dad, Plip - I literally can't imagine what it must have been like.

My brother was a pilot and literally refused to discuss anything about the War - apparently that was pretty common among some but gosh, what a load all soldiers must have carried with them for the rest of their lives.

And the heros still surviving ... it's no wonder one sees them tear up when standing at Memorials, etc. Heroism quite beyond words!

Yes, Plip ... sadly I suspect man-kind is doomed to play over and over and over the slaughtering of fellow man (and woman and child).

Honest think the term man-kind should be shorted as 'kind' doesn't seem to fit within the concepts of war - sigh.

You are correct there I am sorry to say.

After the D Day landings and when the allies got a firm hold on France, they were on the march. The first Canadian army, under General Sir Henry Crerar fought in France until the Germans retreated. Then his army turned north and they liberated Dieppe. Then they went further north into Belgium to free up the port at Antwerp. Eisenhower gave the job of freeing Holland, the Netherlands to the Canadian army under a Canadian General. His army was 450,000 men strong. It consisted of Canadian, British, French, Polish and US troops. It was a bitter campaign and a tuff fight, but, we won. My uncle was part of that too and he never said a lot about his service, only sometimes when he was in his cups. He told me a story, when most of the Germans had retreated or were kicked out about approaching the German border. There was a concentration camp close to the border and he said they were 20 miles away from it and he could smell this stench. It was the stench of human bodies decomposing in the sun. Then he would start to cry. He said I will never forget that smell and the sight we saw, once we got there, as long as I live.

When I was growing up one of the older members of our church has been a photographer during the war and was with the first group of soldiers to enter Auschwitz. For a number of years his photos were kept classifed but finally they were released back to him. He decided to show them at the church one night. You have to have a relase from your parents if you were under 18 to see them. While he was showing them (slide presentation) he talked about the stench, bodies piled in heaps with some of them still alive, prisoners just standing there with blank looks in their eyes, furnances ready to recieve bodies, etc. With today's politcal climate there are so many people that will say that this never really could have happened and they must have been photoshopped. We know better due to the fact that this gentleman WAS there and photoshopping was not possible back when he showed the pictures. Never under estimate the lack of intelligence in our population.

When we were in Poland we had the opportunity to visit
Auschwitz, we thought it might be too traumatic but decided we should go. Our guide was a young Jewish boy. Sam asked him if it upset him to do this job and he said No, I want people to see what they did to us. It was quite an experience and so hard to believe what actually happened there. The inhumanity is so hard to believe,One thing we saw that stuck in my mind were piles and piles of suitcases all painted with a number as they were told they would then recognize their belongings to re claim in when they had been deloused not realisiing they were going to their deaths in the gas chambers.absolutely unbelieveable all of it!

Man's inhumanity to man is terrible. Look at the African and Arab countries to see just what they continue to do day after day !!!! Makes you sick.

It really does Plip and we wonder where it will all end and when.

It truly was an horrific time. My mum used to get upset telling me what they saw on the Pathe news at the cinema. Unbelievable.

I have a feeling it will end one of these days when the prolification of nuclear weapons causes some country to start launching and the rest following suit.

How truly lucky we are that we can't possibly know the horrors suffered, Rich - and it's no wonder your brave and strong uncle would shed tears remembering the human toll.

That must have been a horror - to have been there in order to take the photos, Plip, and to have some now say they were 'shotshopped' is an insult not just to the photographer but the people who suffered beyond account.

Must like the bone heads who swear there was no prisoner of war camps nor camps like Auschwitz that you saw, Joelle - but not just Jewish people died in mass, so did so so so many others for reasons that would make no sense to a sane person and killed with the same regard we give a fly when we swat it.

I try so hard to understand why people can have 'long memories' and still hate 'Japs' and 'Krauts' (just typing the words makes me feel a bit ill) ...

But ... surely there must be a time when people let the past 'go'?

Would have to have the Japanese hate us forever because we dropped the worst thing humanly possible on them in order to end WW2 ... or the Germans to think of us as enemies forever.

I mention this because my mother-in-law was reading the paper with a story where a 87 year old man was found living in Chilliwack (an hour east of us) - and he had run a camp in Germany.

I am not excusing what he must have done ... but he and his Canadian born wife have lived peaceful and productive lives here in Canada since the war and for the past few years he's been severely ill.

She wanted him tried and deported ... and I said, "Please let the past stay in the past". And I thought she was going to hit me.

There is no 'right' and 'wrong' to this, I know ... but in so many Countries right now grandparents have taught their children to hate ... and now those same 'children' teach the own to hate.

Darn near enough to make one want to stick one's head under a pillow and hide.

The way things are going the pillow may need to be in a bomb shelter.

Wonder if bomb shelters work for the newest kind of bombs and other 'interesting' methods mankind have come up with for killing others 'en masse', Plip?

My grand dad was in the first world war. He left Lancashire as a youngster and moved to Glasgow to be an apprentice foundryman. Shortly after he started his trade, Britain and France declared war on Germany. He enlisted in a Scottish cavalry regiment and off he went to war. Toward the end of the war he was gassed and spent several months in hospital. He hated Germans until the day he died. I asked him one day, why do you hate the Germans so much. He looked at me and said, when your best friend is fighting beside you one minute and the next his head was blown off. You don't forget things like that. You don't forget how they machine gunned our troops on masse and thousands of soldiers died. He lost lots of friends, yet he was lucky, he came home. He was a working class bloke and a wonderful man and a good musician.

It is hard not to hold a grudge under those conditions.

I honestly understand that, Rich, truly I do.

And sometimes can't help but think it would be a kindness to be able to forget so hating doesn't become of a good man or woman's life.

It's not 'wrong' and is so very understandable for those that went through so much.

Unfortunately, when a Allied soldier kills an enemy, that enemy's family can continue hating too and on and on it goes - and sadly, unlike your dear Grandad, some of these families hold grudges for generations and actually act on their hatred, including teaching their children to hate and act on their hate too.

Nope, no easy answers, that's for sure - but I'm always so so so grateful for every single soldier and civilian that sacrificed so much so we can live the way we do - free!